Hello my lovelies....firstly let me say I'm sorry I have been away for so long. I cant believe it was early February when I last posted here. I hope you're all well?

So let me explain where I have been. If you've been following my blog for some time you will know that I am a fur baby Mamma to 3 kitties. Nell, my shadow as I like to call her, my oldest girl at 16....here she is, just look at that face! No not my mug lol :) 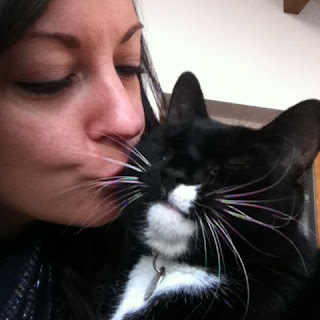 On Sunday 11th March she fell off a window sill in our home and ruptured her cruciate ligaments in her right knee. I initially thought that she had dislocated her leg as she was dragging it. We rushed her straight to the emergency vets, who said they would x-ray her leg and call us when they knew more of her injury.

They ended up keeping her overnight because her blood tests revealed that her kidney levels were high so they put her on a drip. They called us and said that it was dislocated and they had popped it back in and we could go and collect her in the morning. We drove down and as soon as we got into the consultation room it turned into a complete nightmare.

The vet (who I have to add was not the vet that administered her the day before) said that even though they had popped it back in it had popped out again and that she had obviously done more damage than they thought....ermmmm you X-rayed her, how the hell did you not know this from those??? She then preceded to tell us that it was most likely irreparable and that she was lame in the leg and we would have to considered the option of having her put to sleep!

I still feel sick when I read that back to myself!!!! I almost collapsed, Mr.B (who has a heart condition) went as white as a sheet, I burst into tears and said I just couldn't do it. The vet said we could take her straight to our registered vets for them to assess her xrays and give us a second opinion. Obviously I was a total mess by the time we carried out our little girl in her carrier to the car. I completely broke down....approaching my forties I don't have children, my cats are my babies and anyone who has seen me with Nell would know, she's my girl. I just couldn't bare the thought that our time together was up. I was devastated.

We drove straight to our vets and waited outside for them to open (we had collected her at 7:30am). Through lots of tears we explained exactly what the emergency vet had told us, our vet was completely gobsmacked that we had been told this. She said they would admit her, give her some good pain meds and when they received the x-rays they would assess and call us. The last thing she said was "don't worry, there will be something we can do to help her, we certainly would not consider putting her to sleep, leave her with us we will look after her". I burst into tears again, I wanted to hug the vet!! She could see in my face my appreciation and put her hand on my shoulder.

We collected our little ball of fur at 7:30pm the same day, it was explained to us that she had torn her cruciate ligaments in her knee, which meant her leg was completely dislocated at the knee joint. She was drugged up to the eye balls to compensate for the terrible pain she was in. The vet said that she would need an op by a specialist which would be expensive or we had the option of having her leg amputated. I felt helpless....who were we to make the decision of whether to have her leg off? We asked for a consultation with the specialist. They came back 3 days later to say that they thought it was repairable by surgery and that they were happy for our vet to carry out the procedure as she was in fact an orthopaedic surgeon. We quickly made the decision to admit her on the Friday to have the operation. 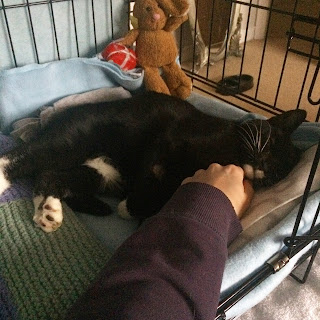 The week leading up to her surgery was the worst week I've had in as long as I can remember. I had to force feed her, water, food and medication because she just wouldn't take anything. My heart was broken, I felt like I just couldn't do anything for her (even though I was). I explained to work that I needed time off to look after her and they were great! We had to buy a dog crate to keep her in, partly so she couldn't move her leg and partly to keep her segregated from the other two fluff pots. I sat by her side all week, I barely slept from constantly listening out for her and giving her pain meds throughout the night.

Friday morning we took her in for her op, they explained again the risks of an old girl like my girl going under anaesthetic and I had to sign the consent form...I kissed her head and told her to be really strong for Momma and that I would be back to collect her later with treats.

Mr.B took me for a cup of tea and then we went to buy her some tasty treats from the pet centre for when she came home. 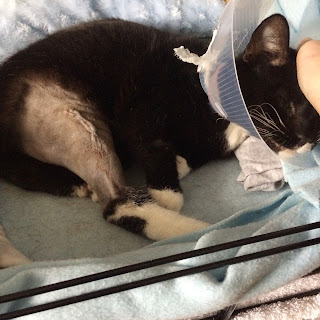 We collected her later that day and the first thing I said to her when I saw her was "I told you I would be back to collect you my tough little cookie!". I was soooooo relieved that she had come out the other side, complete with her "turkey leg" as Mr.B called it :) 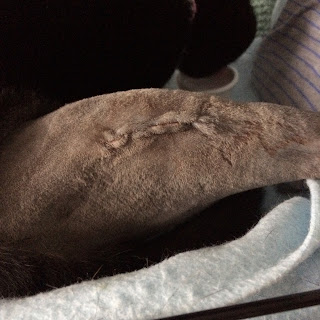 This was literally an hour or two after her surgery, Clare out vet is just so wonderful. She explained what we needed to do and what to look out for and gave us plenty of meds for our girl. She wore a cone for the best part of a week, then she decided that was enough...she thought it would be really funny to keep her Mamma awake at night by dragging it across the bars like a convict!! So off came the cone and we just told her every time she went to lick it no. She learned quickly it was not allowed and left it alone.

After two full weeks of cage rest we were allowed to let her have room rest and introduce her back to our other two fur babies. And after 3 very long weeks, I finally had my first lap cuddle! 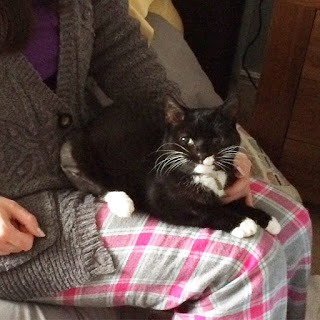 That was 5 weeks ago, she is now allowed up and down stairs, but no jumping or wrestling with the other two (yeah that's been hard, try having eyes in the back and side of your head to stop them). We bought her steps to climb onto our bed (her favourite place) and have watched her like a hawk. When I had to go back to work we even called upon Mr.B's Mam to come and watch her :) 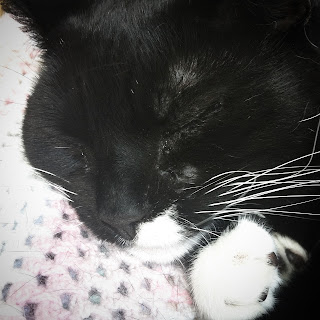 This little lady still has a long way to go but I really cant believe how far she had come and how well she is doing!! She is one little tough madam for sure. She already had a special place in my heart, even more so now. I know pets don't live forever, but I am so bloody pleased that we get to have some more time together....we just weren't ready for the end! 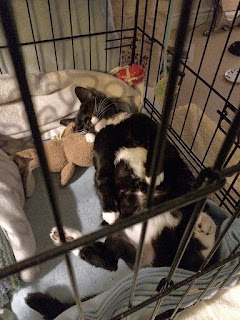 Normal service should now resume, I need to get my butt back into my sewing room to rustle up some of the make 9 projects I still have on my list!!! lol

I did spend some time making another crochet blanket for my great niece and started a cross stitch which I will show you another time.

But for now lovelies, I'm off for snuggles with my black and white warier!!!