Cheryl if you are reading this???

Back in February I wrote this post, do you remember?? I've thought about writing a follow up post......should I? Shouldn't I? After about a month of indecision I thought, lets get it out and over with. 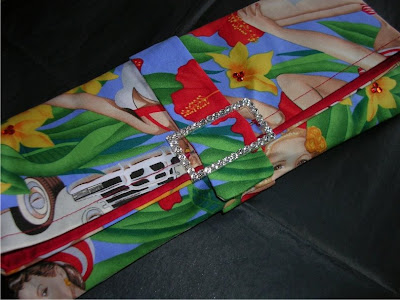 I made this bag with a very special recipient in mind. Someone once asked me who I thought would be my ideal celebrity to fit my specific style. After a lot of deliberation I decided it had to be someone who is confident, has a unique sense of style, which is a mix of sophisticated, fun and classy. And why not be someone from my neck of the woods.....So it would have to be Miss Cheryl Cole.

A friend then kindly passed on her home address to which I posted it to, in the post office I sent it 'Signed For' as I presumed that since it was travelling Royal Mail, that it would arrive safely at its destination. After about 1 week I checked online to see if the package had been 'signed for' only to find that the only tracking was that of the post office where I had originally posted it from. Puzzled?!?!?!?

I decided after 2 weeks I would contact said Royal Mail to see if I could get confirmation of delivery, only to be told that 'SIGNED FOR' parcels were signed for at the discretion of the post man delivering. Well as you can imagine my response to that was not pleasant......why do you pay extra for signed for if they aren't going to bloody sign for it. I could have sent it normal 1st class and played the Postage Lottery just the same. I had a little glimmer of hope that the parcel did actually arrive and that she was pleased with the clutch bag I sent and maybe, just maybe she would have sent an email or something to say thank you. Me being me and wanting to see the good in people, I am resounding myself to the fact that somewhere in the ether of the postal system my little clutch bag is floating around lost....trying and hoping to get to its destination.....or even be returned back to me????

Where ever you are little bag I hope that you are safe and well and that someone is looking after you!!!! :(

Lesson learned: want something to reach its destination that is extra special.......Send it 'Special Delivery'.....more expensive but at least you'll know that it got there!
Posted by Bagladee at 23:16