We went to see this last night at the arena and it was amazing!!! I'd bought the tickets for me and Chris about a month ago not really knowing what to expect. But then he saw 2 of the smaller Dino's in town when they were advertising the show. He said they looked great so I was really looking forward to it. 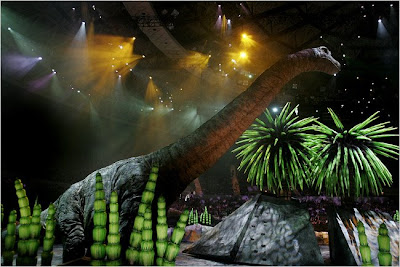 And I certainly wasn't disappointed, there was a guy (palaeontologist) who narrated the whole show from the floor and introduced the Dino's and told us all about the earth and how its transformed and that Dino's roamed the earth for 170 million years!!! 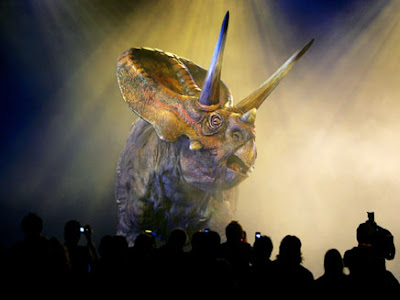 They were so life like, which for some of the smaller children was quite scary......the show was brilliant. I think we were just about the only couple there, it was mostly families or Dad's with their sons, which I thought was really nice to see. 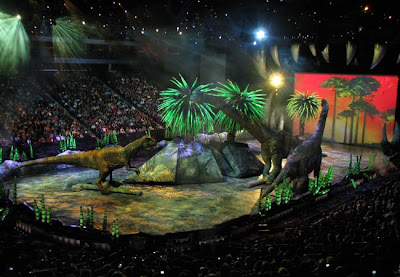 They were all impressive, Stegosaurus was huge!! But this lady was even bigger!!! A female T-Rex, the size was just astounding, very scary!! She was easily as big as our house, well you can see the narrator in the background, he barely comes up to her knee. 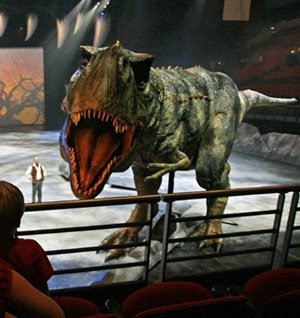 She also had her baby with her, very cute. 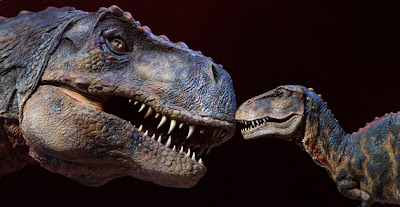 The little one was mimicking its mother when she roared at the crowd. 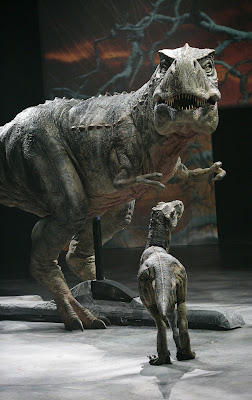 Hard to believe that little Dino turned out to be as big as its mother.
Obviously these were all animatronics, but wow what technology. For the children it was magical, for me and Chris it was just amazing how we can replicate such a life like show. If you have children and the show is coming to you, you should go and see it!!! It is well worth it, not the real thing of course but as close as you're gonna get.
Posted by Bagladee at 10:32